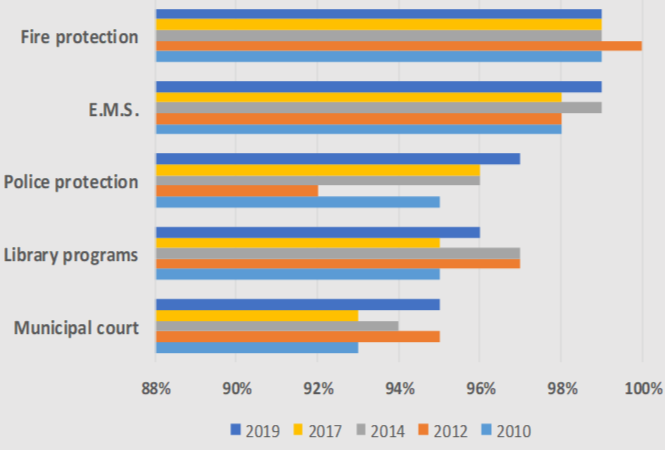 City staff presented results from the 2019 Citizen Survey to City Council during a December 2019 worksession. The survey was available online to all residents in late 2019. The City received 1,317 responses: that is about 15% of all Colleyville households. The survey has been conducted on a mostly biennial basis since 2010 and is an important tool for gathering citizen feedback on priorities and satisfaction levels.

The other major focus area of the survey was about citizens’ desire for a multi-purpose recreation facility. Based on feedback, there is a growing number of citizens interested in  the City providing a multi-purpose recreation center, but feedback was mixed on the size and offerings of the facility and how to pay for the center. The strongest preferences were for Comprehensive Option B, a 45,000 square foot facility with a gym, senior center, indoor aquatics, and multipurpose rooms (50% agree or strongly agree) and the Renovation Only option to update the current Senior Center facility (42% agree or strongly agree).

Mayor Newton said the survey results were insightful and provide a path for future decision making. City Council and staff use the results of the survey to guide priorities for 2020 and beyond.